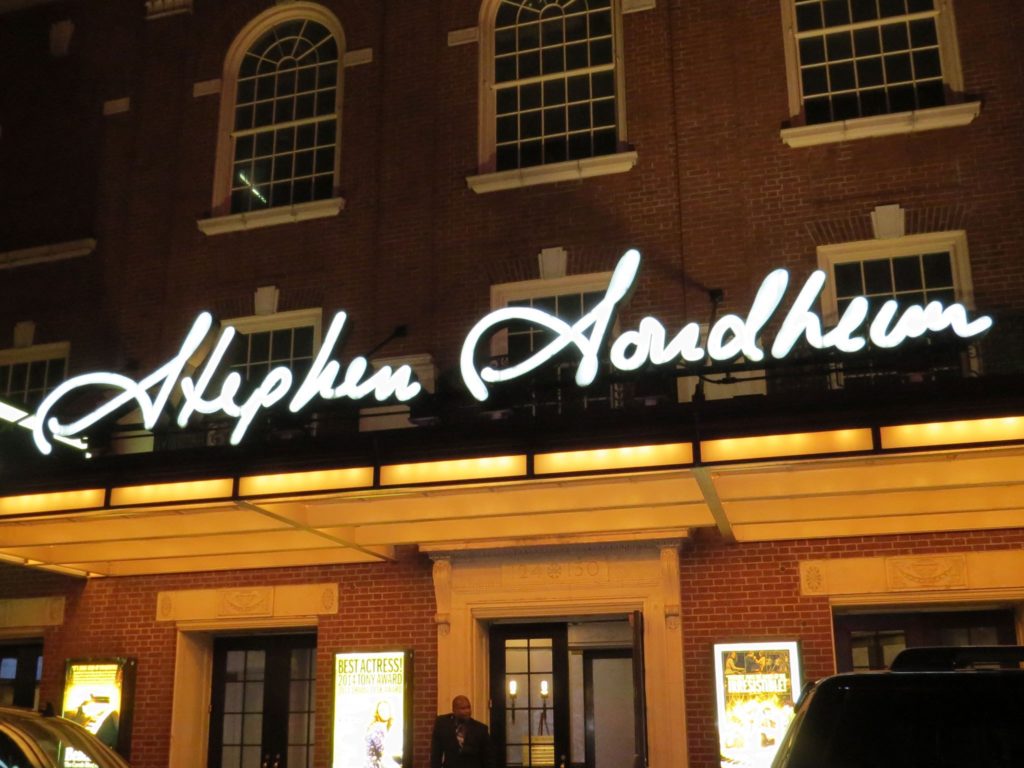 Stephen Sondheim Theatre that was formerly known as Henry Miller’s Theatre, is a Broadway theatre operated by Roundabout Theatre Company. This handsome theatre is located at 124 West 43rd Street, between Broadway and 6th Avenue, in Manhattan’s Theater District.

The theatre was designed in the Neo-classical style by architects Paul R. Allen and Ingalls & Hoffman. Albeit, it was built by and named for actor-producer Henry Miller. For the construction of the theatre, Elizabeth Milbank Anderson, owner of the lot at 124 West 43rd, and Klaw & Erlanger were his financial backers. The 950-seat theatre which was the first air-conditioned theatre in Manhattan opened on April 1, 1918, hosting the play The Fountain of Youth.

The theatre had its first hit show with The Vortex in 1926, produced by Noël Coward. In the same year, Miller passed away. Following his death that year, the theatre was managed by Miller’s son, Gilbert, who bought the Klaw & Erlanger interest and paid 25% of the gross take of each play he produced to the Milbank Memorial Fund. From the 1930s through the late 1960s, the theater enjoyed its golden years. It was performances by Helen Hayes, Leslie Howard, Lillian Gish, Douglas Fairbanks, and Ruth Chatterton that graced the theatre’s stage in those 30 years.

In 1998, the facility briefly returned to performance use as the Kit Kat Club. It was at the time one of its kind as the “club within a club” concept was developed by Johnson and his partners. The club got its name Kit Kat Club from the Berlin nightclub in the 1966 musical Cabaret. The club housed Roundabout Theatre Company’s popular revival of the musical. After business hours, the location served as a popular nightclub that features burlesque entertainment and dancing. Unfortunately, a nearby construction accident temporarily closed the building and forced Roundabout Theatre Company to relocate to Studio 54 to finish their production on July 22, 1998. The Kit Kat Club continued to operate as a nightclub and a venue for private parties until it closed on April 11, 2000. It was then that the theatre was rechristened the Henry Miller when Urinetown opened in 2001.

The theater closed in 2004, the interior was demolished and subsequently rebuilt by the Durst Organization to build the 57-story Bank of America Tower. Its neo-Georgian facade, landmarked by the city, remains and includes a 1,055-seat theater. The underground theater is designed by New York firm of Cook+Fox Architects within the new structure.

In 2007, the Roundabout Theatre Company announced it would operate the theater as its third Broadway venue. The new theater opened in September 2009. The re-opening was done in style with the reproduction of the musical Bye Bye Birdie.

On his eightieth birthday, Roundabout announced that Henry Miller’s Theatre would be renamed Stephen Sondheim, to honor American composer and lyricist. An official renaming ceremony took place on September 15, 2010.

The first production at the newly renamed Stephen Sondheim Theatre was The Pee-wee Herman Show. The show played a limited ten-week engagement from October 26, 2010, through January 2, 2011. Another revival production after musical Bye Bye Birdie, Anything Goes starring Sutton Foster and Joel Grey, followed from April 7, 2011, through July 8, 2012. And, since November 21, 2013, the theater has been home to Beautiful: The Carole King Musical.

For more information on the Stephen Sondheim Theater please read these additional pages:

Ticket Policies:
Read about our ticket guarantee and refund policies.