If you haven’t seen Mrs Doubtfire The Musical live at the iconic Stephen Sondheim Theater this coming July, then you are missing out on a truly unforgettable time. This show brings some of the greatest talent in Broadway to create the classic 1993 Robin Williams film in a bold new way. Classic songs and emotionally moving performances by lead star Rob McClure are all part of the show that can be yours. If you want to experience a show with heart and hope then make sure you don’t miss out. Click the Buy Tickets button below to secure tickets to see Mrs Doubtfire the Musical at the Stephen Sondheim Theater on Wednesday 7th July 2021.

The Mrs. Doubtfire musical may be on halt until early April, but it’s already looking to be one of the most highly anticipated musicals to hit Broadway this season. Fresh off of a record-breaking sell-out tryout in Seattle’s 5th Avenue Theatre, this musical directed by Jerry Zaks retells the story of Robin Williams’ 1993 film in a bold new way. A musical masterpiece composed by Wayne and Karey Kirkpatrick carries the story and brings audiences from scene to scene in this stunning tale of a father who will do anything for his children. During the tryout period, critics have called the show glorious, heartwarming, and incredible, with many citing Rob McClure’s performance as Daniel Hillard/Mrs Doubtfire as one of the best parts of the production. The cast are clearly familiar with Robin Williams original film and have taken great care to honor him and his movie without doing a bit-by-bit recreation as many early critics feared. As of this time, the production is preparing to entertain audiences when showings start up again, so make sure you book your tickets while you can to see Mrs. Doubtfire at the Stephen Sondheim Theater. 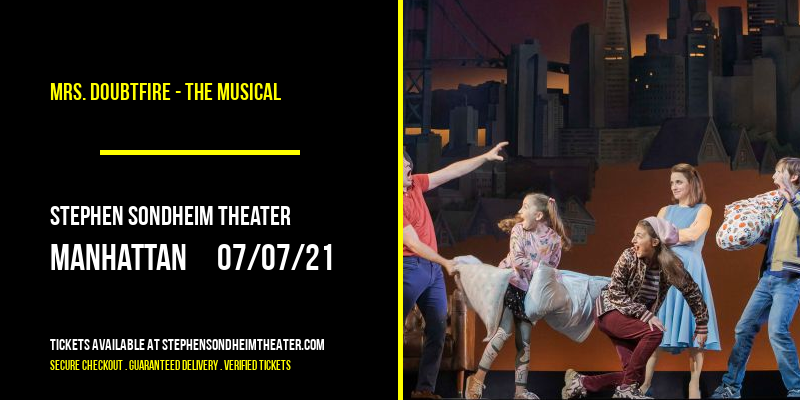